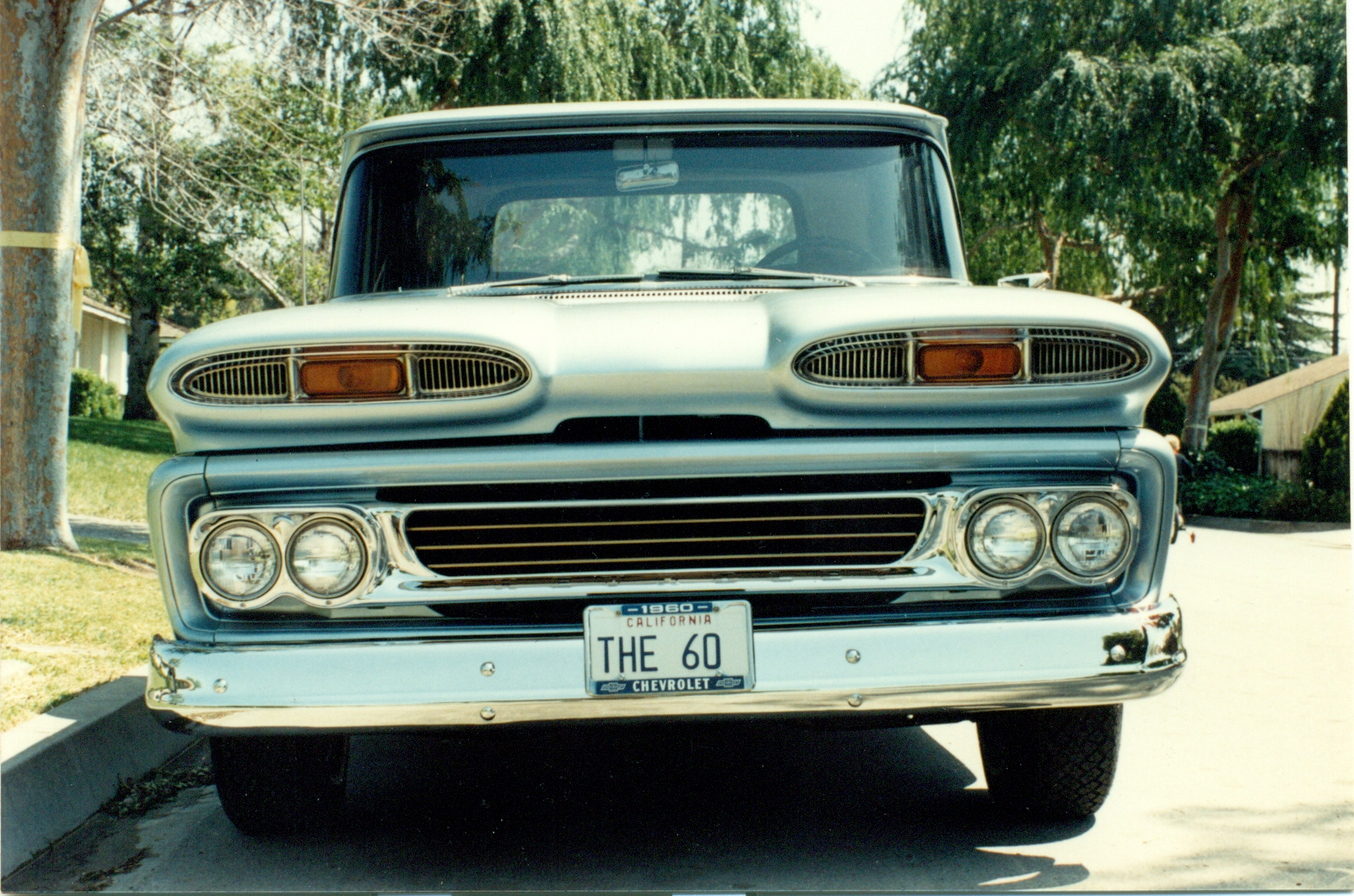 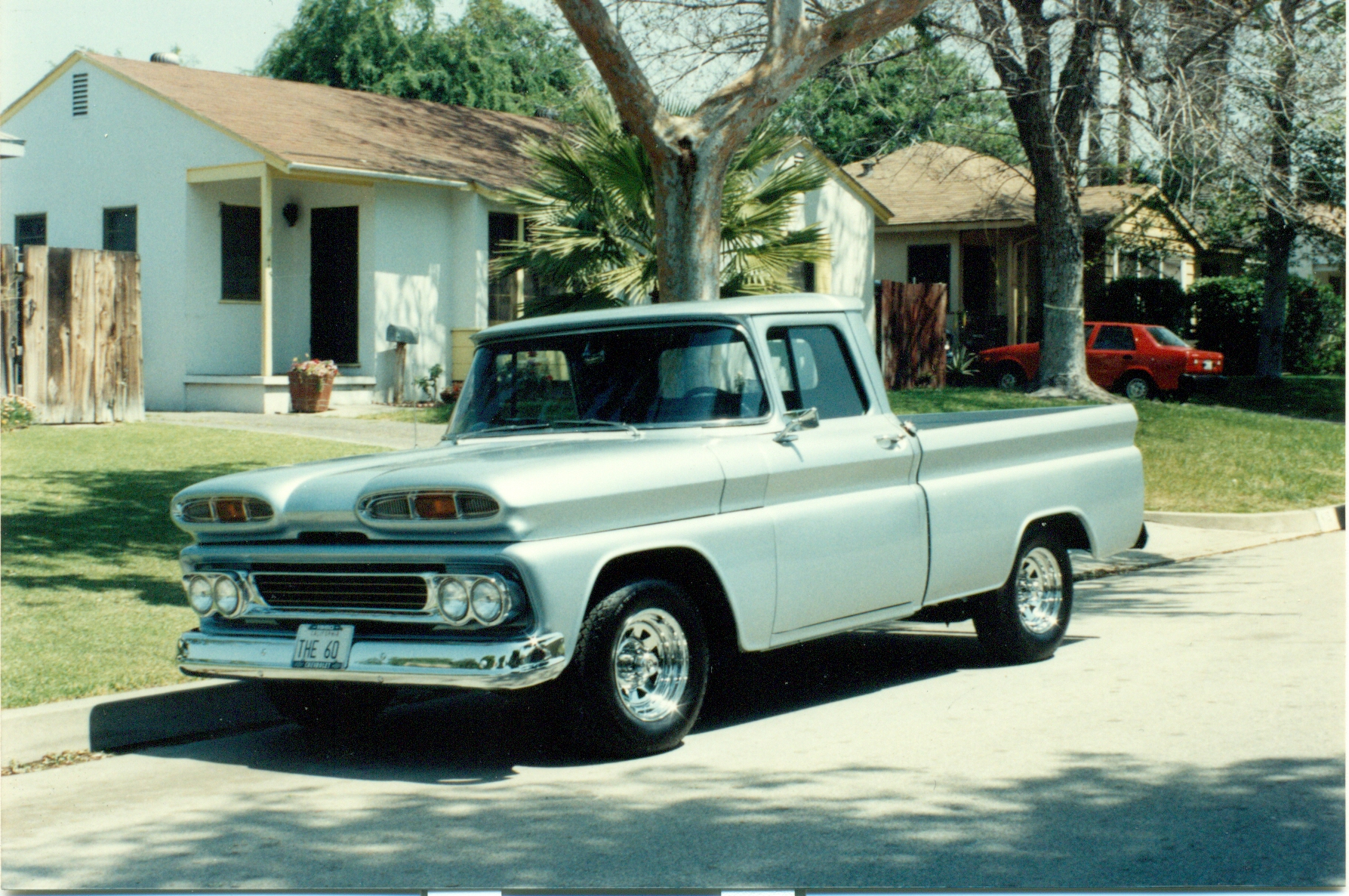 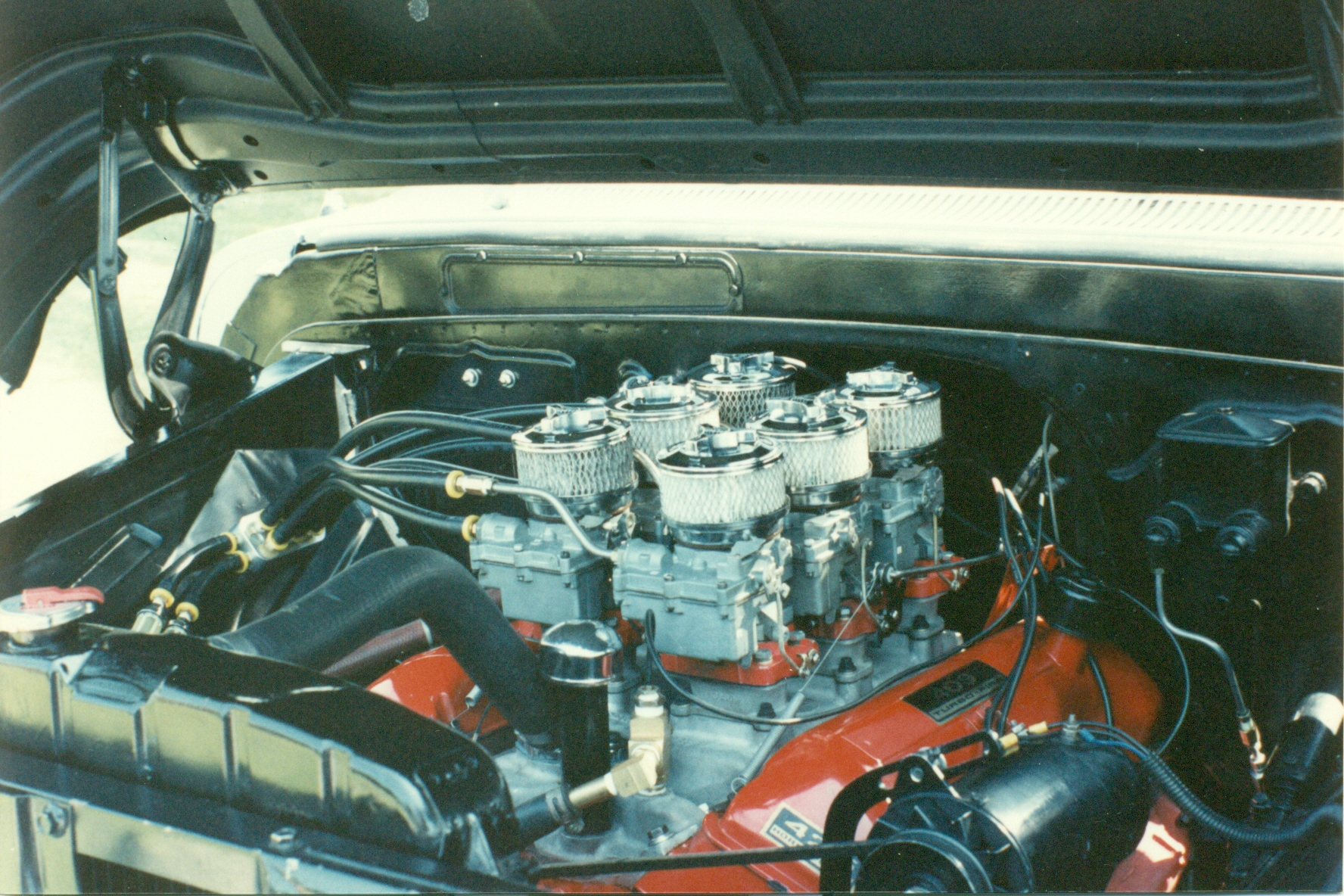 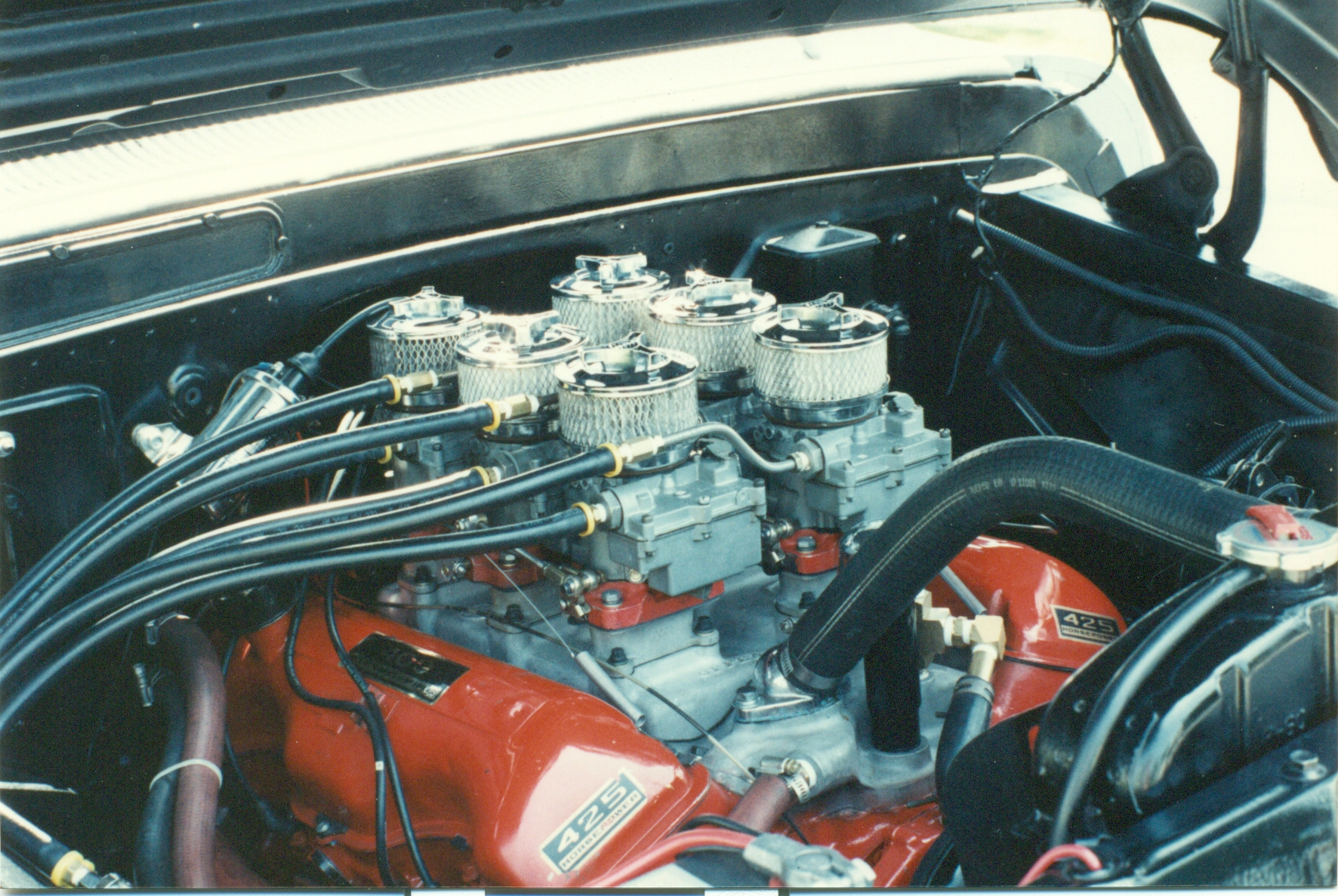 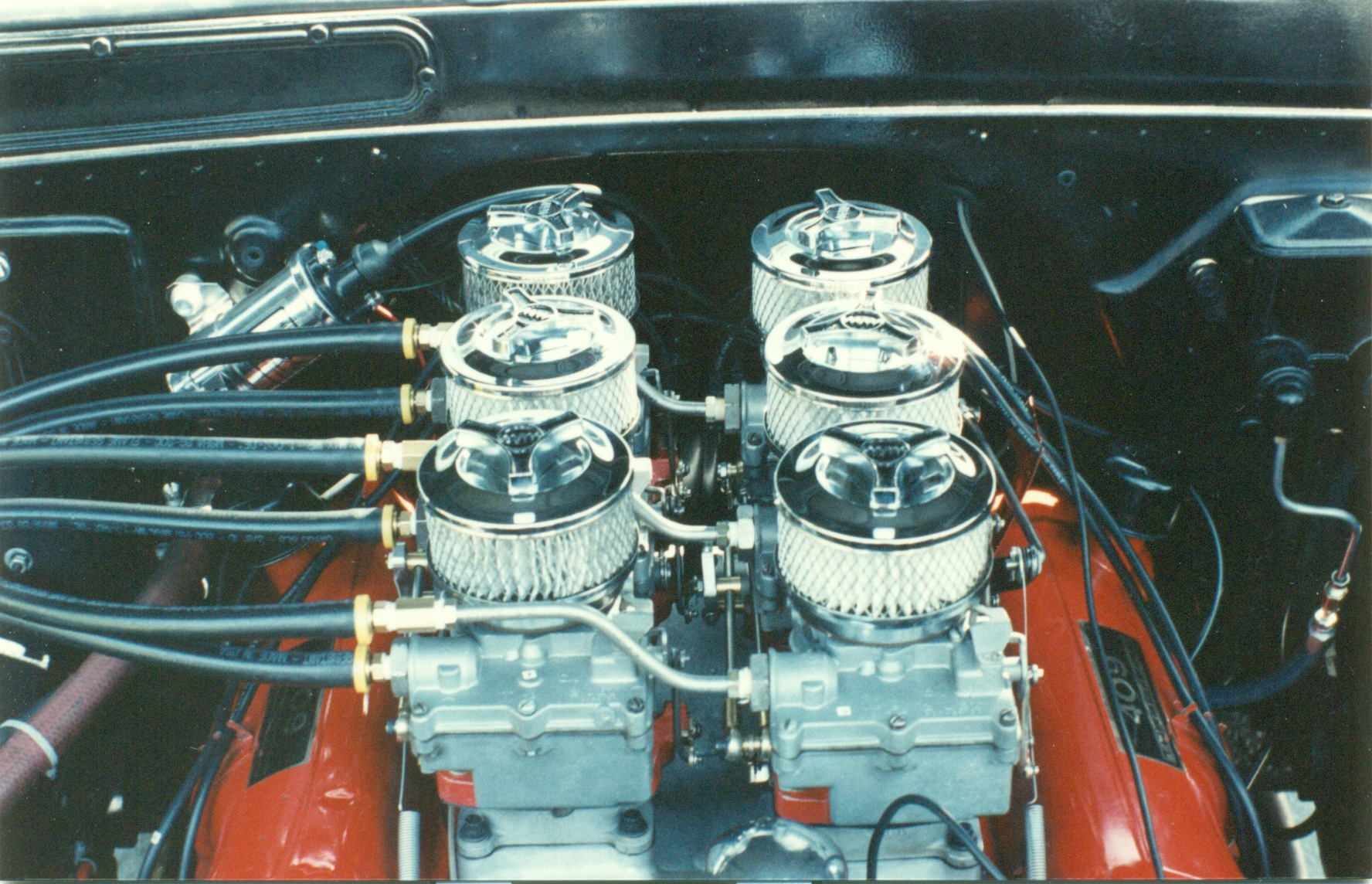 We wanted to share a story that was first shared with us by Hot Rod Magazine in 1991.

Our products continue to contribute to the backdrop of Americana, in the form of a 1960 Chevy Truck started by a father and his son. The father sadly became ill and passed away before he could finish the truck.  His son went away to the Navy and worked to complete the truck on his trips home. The son finished the truck with a 348 Offenhauser Intake Manifold, Stromberg Carburetor, and Rochester 2 Barrel Carburetor.  His mother wrote us this poignant letter:

From: The desk of a Chevy housewife

I thought you would like to know about my Navy son that duplicated his Dad’s 30 year dream.  My husband, John, has always been a Chevy man!  Bought a brand new 1960 1/2-Ton,  Fleetside Apache 10 in 1960.  He sold it in 1969, and always regretted it.  His dream was to own another 1960 1/2-Ton, Chevy Truck.  Around 1985, we found a 60 truck, unfortunately, the only thing it had was the shell and 4 bad tires.  It was towed home and sat for the past 6 years.  My husband had a stock Chevy 409 engine in the garage that he had rebuilt 19 years ago.  His plans to restore the truck, with the 409, were shattered when he got severely ill with lung problems and cancer.  I didn’t think the truck would ever be done.

My son, Mike, had joined the Navy and came home as often as possible.  he decided he would complete his Dad’s truck.  He worked on it, on his weekends and leaves.  He was discharged from the Navy in Jan. 1991, and he came home to finish the truck.  I must say, it turned out GREAT!  As you can see from the photos I’ve enclosed, he has adapted an Offenhauser 348 6 Stromberg carburetor intake manifold to accept 6 Rochester 2 barrels, through progressive linkage, on a stock 409 engine.  All I can say is, “SHE’S REAL FINE, DAD’S 409”.

Thank you for your time.  Your Hot Rod Magazine is really enjoyed at the Hebert house. 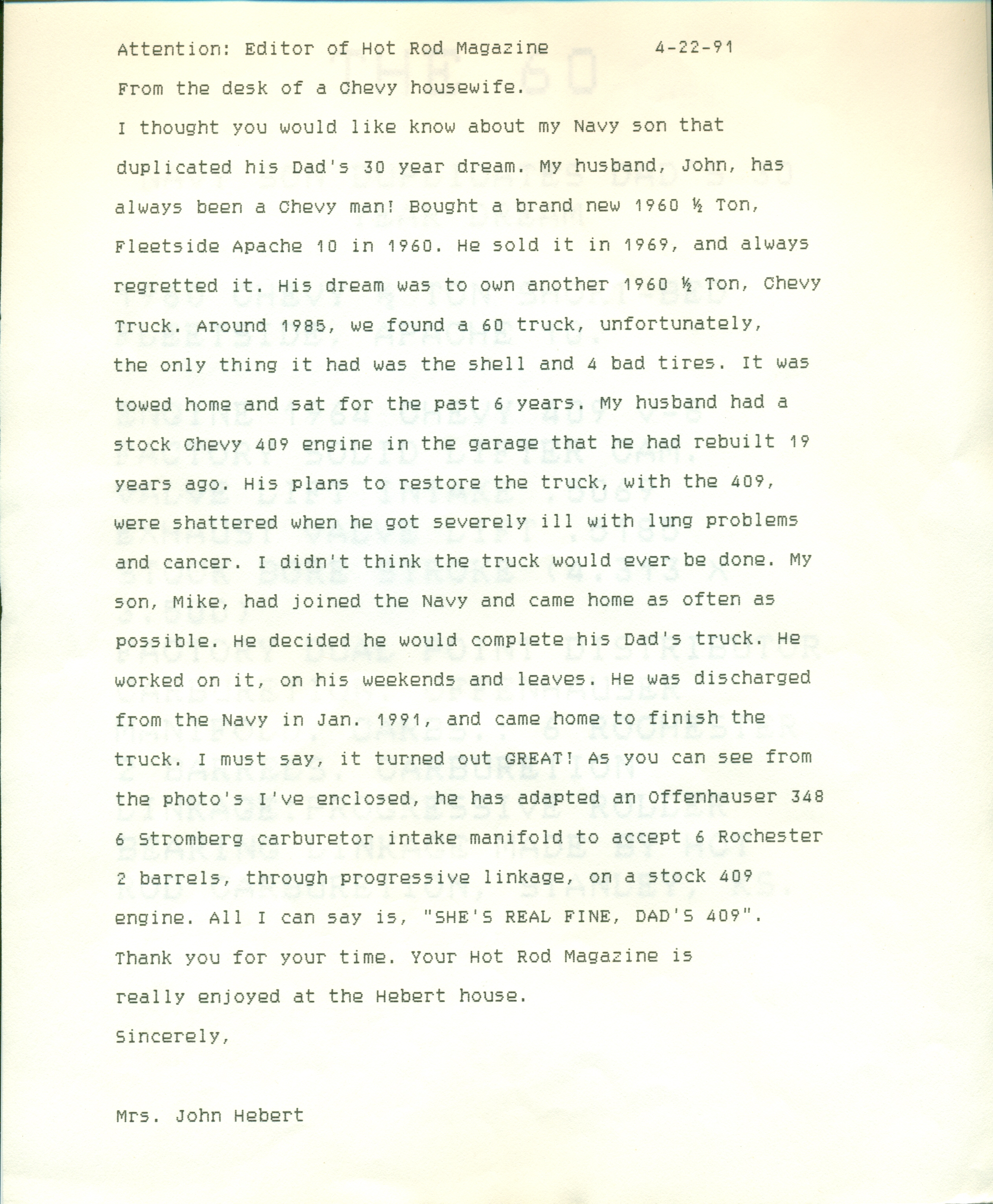